Wolves staff and players will give their support to the 22nd pre-match collection for local wheelchair charity POWER PLEAS, at the game with Huddersfield Town on Saturday 3 October 2015 (12:30pm).

Tettenhall Rotary Club have organised the collections annually since 1994, supported by POWER PLEAS members and recipients, and thanks to the efforts of Wolves’ Vice-President, Baroness Rachael Heyhoe-Flint. Over the years, the Rotary Club have raised over £48,000 from their collections, of which over £33,000 has been given to POWER PLEAS.

As a result of the fundraising and generosity of Wolves supporters for the last two decades, a total of 25 wheelchairs by either total or part-funding have been donated to local people, which amounts to a fifth of the total number of wheelchairs the charity has financed.

In addition to providing wheelchairs, the charity has recently provided 15 mobility trikes to local youngsters and a grateful recipient of one of these, 4 year old James Padfield, was recently at the Compton Road Training Ground to say thank-you to Baroness Flint, Alan Russell of the Rotary Club, and the Wolves players.

James will feature in our publicity this year and is keen to show off his trike that he has been using on holiday on the Isle of Skye with his grandparents. He has also been “trailing” his Dad as he has cycled around.

The impact of the POWER PLEAS trike upon James can be gleaned from his mother, Sarah, who explained, “James was diagnosed with 5q14.3 deletion syndrome just before he was one. This is a chromosomal condition which is extremely rare, caused by partial deletion of his 5th chromosome, meaning the expectations for James' future development were, and still are, unclear.

"It was not anticipated that James would walk. However, he is now pottering around, slightly unsteadily, but mobile nonetheless. He has yet to acquire any verbal communication skills, but is able to make his opinion known.

"James is part of an active family, with a Dad who is a very keen cyclist. One of the family's long term goals for James was to ride a bike, enabling family cycling outings.

"The Tomcat trike that POWER PLEAS have donated to James is his favourite mode of transport! He is genuinely excited to get on it, and loves riding it – it puts a big smile on his face! The trike gives James an opportunity to see the world from an upright position, getting him out and about. It provides him with much needed exercise to keep his muscles active, promotes a great range of movement in his legs, and is allowing him to develop new skills as he learns to turn the pedals himself.

"The trike gives James a level of independence and freedom that he has not experienced before. It also widens the opportunities James and his family have to enjoy outdoor pursuits together."
Keith Berry, Chairman of POWER PLEAS, says, "We have provided 5 trikes in the past year and the collection on Saturday will contribute to another one for a local child. We hope that the fans will once again support us generously as they have done in the past." 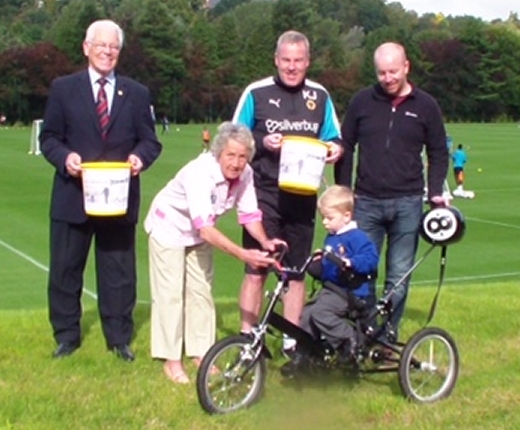 POWER PLEAS Thanks Wolves Fans
A Starter for Ten: A Partnership Presentation